FROM ENGADIN TO VALTELLINA: A JOURNEY ON THE BERNINA EXPRESS FROM ST. MORITZ TO TIRANO

The journey from St. Moritz to Tirano is 61 Km long and it requires 2,5 hours to be completed. Follow me along this spectacular journey along the Unesco section.

The train leaves St Moritz Station (1775 m) on the lakeside, crosses the river Inn, runs through a long tunnel and comes out into Bernina Valley near Celerina, a village which has maintained its quiet, traditional atmosphere and many old houses decorated with „sgraffiti“. Shortly after leaving Celerina the train route passes the Church of San Gian on a wooden hill, a protestant church whose tower in 1683 was struck by a lighting and never rebuilt. The interior has a finely painted coffered ceiling decorated with the coat of arms of Bishop Ortlieb von Brandis and a fine cycle of frescoes in the choir painted in the 15. century by Lombard painters.

The train route continues along the valley reaching Pontresina, the capital of the Swiss mountaineering. The tourist trade started here in the second half of 19. century when the enterprising Miss Klara Chris opened the first inn with 3 beds where the British mountaineers would stay attracted by the surrounding peaks. Pontresina quickly developed into an attractive resort with splendid Grand Hotels of the Belle Epoque period. After passing Pontresina, the train route reaches the small station of Morteratsch (1896 m), at the mouth of the Morteratsch valley, passes the Torrent Bernina with a view over a pretty waterfall, winds its way up the last stretch of the Bernina Valley and reaches the Montebello-curve with a beautiful view on the Bernina Peak and the Morteratsch Glacier. The train proceeds now flanking ancient military defences constructed during the two world wars until it reaches the station of Bernina Suot with sight over Bernina Houses, a lovely mountain hotel built on the road to the pass in the 16. Century and also the highest permanently inhabited place in Europe.

The train will now soon reach the station of Bernina Diavolezza, built in 1956 to provide easy connections to the newly-constructed cable-car that reaches the Diavolezza Hotel Refuge, at a height of 2973m on Mount Diavolezza. From the terrace there is one of the most magnificent views in the entire alpine chain (Piz Bernina, Piz Palü, Piz Morteratsch, Munt Pers). After passing Bernina Lagalb and continuing alongside the road, the train now comes to Ospizio  Bernina, the highest railway station in Europe, with beautiful views on the White Lake and the Black Lake, both named after the colour of their water. The station was built in 1925 by the architect Nicolaus Hartmann jr in “National Romanticism” style at an altitude of 2253 m. From Bernina Pass the train crosses the Val da Pila and arrives at the panoramic station-hotel at Alp Grüm, built in 1923. The large terrace of the hotel offers a splendid view on Palü Glacier and the Poschiavo Valley, with the Orobic Alps in the background.

After leaving Alp Grüm the route offers a long semi-circular bend that provides travellers with one of the most beautiful views of the whole trip, then it drops quickly down along the sides of the wooded mountainside. The train changes direction several times on bends that are both in the open and in tunnels facing the small blue Lake Palü (where there is a hydroelectric power station of the same name), reaches the Stablini junction and crosses the large curving viaduct in Val da Pila before arriving at the Cavaglia Plateau and reaching the station in Cavaglia. Cavaglia is named after the old horse-changing station on the road to the Bernina Pass. Horses were still used during the first winters of the railway’s operation to pull the sleighs that replaced the trains from here to the Ospizio Bernina. After leaving the station the train passes Glacier Garden, a nature park created to protect natural sculptures similar to giants’ cooking pots. These large, cylindric holes (largest spot of erodes holes in the Alps) have been created in the rock by the erosion carried out by small stones and sand carried by the meltwater descending the Palü Glacier. From Cavaglia Plateau the train drops quickly down the wooden side of the mountain anr reaches the small station at Cadera, crosses twice the Cavagliasco ravine over two bridges and reaches Poschiavo with beautiful views over Mount Sassalbo (2881) and Piz Varuna (3453 m).

Poschiavo is a traditional village with a typical italian atmosphere. The historical centre called Borgo is characterized by numerous churches and aristocratic palaces. On the southern edge of the Borgo is Quartiere dei Palazzi, a row of brightly-colored town houses constructed in the second half of the 19th century by Poschiavo confectioners who had returned home after making money with their “Swiss Cafés” across Europe.

After leaving Poschiavo the train runs in a straight line across Poschiavo plateau, crosses a bottle-neck in S. Antonio (sharing the main road with car traffic) and reaches Le Prese where it stops near the Grand Hotel, a spa building with a large park built in 1857. The train then follows the west shore of the lake until it reaches Miralago Station (965m), where the valley narrows. The train begins now a steep descent along a roadbed protected from landslides by large dry walls and arrives at Brusio Station, built in 1972. The train reaches now one the the greatest attractions of the journey, the spiral Brusio viaduct, the only viaduct in the world to make a turn of 360 degrees completely in the open. The helicoidal form allows the track to drop 20 m height in a very restricted space. The viaduct has a curvature radius of 70 metres and stands on 9 arches, each 10 metres in diameter, which ensure a constant gradient of 70/°°. Close to the viaduct a group of crots, ancient constructions used to conserve food, can be seen. After passing Campascio the train arrives at Campocologno Station, on the Italian border. The station was built in 1948 and has a wall decoration of a traveller on his way to Rome.

The near large hidroelectric power station was constructed between 1904 and 1907. The train nows runs alongside the road and enters the square of the Sanctuary of Madonna before reaching the final station at Tirano, where the narrow-gauge tracks are close to the normal gauge track of the Italian railway coming from Milano. The station was built in 1928 in Art Deco style and stands 400 metres from the town centre, where stretches of the walls dating back to the XV century, together with the 3 main gates to the town and the ruins of Castle Santa Maria can be visited. The town boasts many fine aristocratic residences (the Palazzi) dating back to the 18th century. A nice walk along Viale Italia will take to the Basilica, built on the spot where in 1504 the Virgin Mary appeared to Mario Homodei, promising him that the plague would be halted. The Basilica was designed by the Rodari brothers from Como and is the best example of the Renaissance architecture in Valtellina and long remained a symbol of Catholicism against the spread of the protestant reform arriving from the Grisons.

The post From Engadin to Valtellina: a journey on the Bernina railway from St. Moritz to Tirano appeared first on Visit Valtellina. 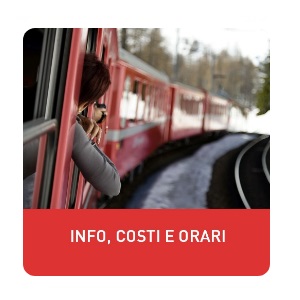 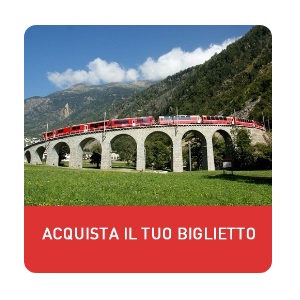 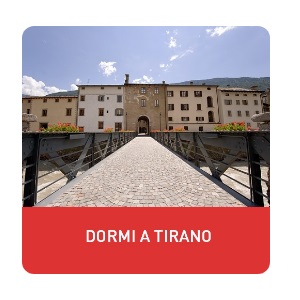